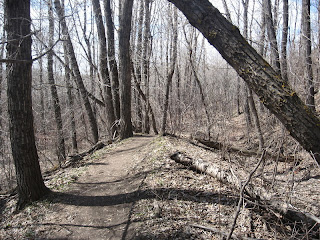 It was a long, snowy, cold winter here in Edmonton, followed by a long, snowy, cold spring.  It's hard to believe that it is May before we can ride the trails without plowing through snow or bogging through mud.  Sure you can find snow and mud on the sheltered trails or those with poor drainage, but trails that are in direct sun all appeared to be clear.

After seeing how wet the trails looked on Tuesday and Wednesday during my commute, I didn't plan a lot of single track during my ride today but rather just get out and spin the legs.  All of the multi use trails that were sloppy on Tuesday are now dry which gave me some hope that there would be some single track action that wouldn't result in a mudfest. We ran into a few small sections of mud and snow during our ride today, but I found more tacky dirt than anything, and that is definitely a good thing. 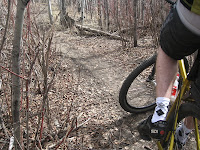 I'm not exactly sure why, but Ewok always seems to be one of the first areas to be ready.  Whether it is because it faces west or due to the slope of the bank helps it drains quicker, the upper trail is always one of the driest trails in Edmonton.  There was only one real muddy section near the south end of the trail in one of the drainage areas where there was some standing water.  Overall, the trail is is prime spring condition. 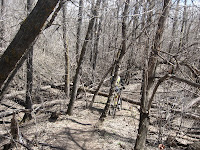 Mill Creek has a couple west facing trails as well which were also quite dry.  The upper trails on the north end of the ravine are in great shape and very little mud to be found.  Some of the steeper climbs were quite dry and loose.  A big 'thank you' to the mysterious person who was busy last fall putting in some ladder bridges over the mud holes. The few mud sections that were found had bridges in place to help preserve the trails as best as possible.

Having some single track to ride home on the commute will sure make the ride home a lot more enjoyable.
Posted by gord962

Most Popular Posts This Month

Other Blogs You Should Be Reading